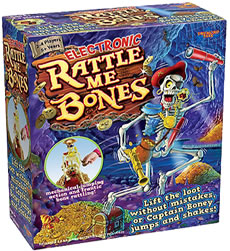 UTCT were delighted to be sent a copy of Drumond Park’s Rattle Me Bones game to try out. The game, which is suitable for ages 5 years and over, requires a minimum of 2 players and a maximum of 4, so Katy, Holly and John volunteered to take part. We were kindly sent this to review.


Setting the game up was fairly easy, although there are quite a few different parts to place together and kids may need an adults help to do this. However once this was set up it was time to try and get the treasure.

The youngest player went first in Rattle Me Bones which in this case was Katy, she spun the spinner and picked a colour,(red) and tried to take one of the Captain Boney’s treasures of that colour.

Trying to take the telescope, which was in his left hand,  proved a little bit more difficult than Katy initially thought, as one wrong move and Captain Boney would wake up and jump around.

Next up was John who had picked the colour blue, taking the blue money bag which was on the Captains rib without waking him up. Holly was last to take her turn and she had the colour yellow, deciding she would try to get the more difficult piece of treasure – the eye patch which was over his left eye, Holly woke up Captain Boney and he started jumping around. Holly had to put the treasure she had collected back where she had tried to take it from and she was back to the beginning.

Each player had to try and collect three pieces of treasure in their colour, or two gold coins which counted at one piece of treasure,  before they could move on to the next round. John had collected three pieces of blue treasure so he was given the chance to get the golden hat.

Taking the golden hat proved quite tricky as it was on Captain Boney’s head and he could wake up at any moment!  Fortunately John was able to get the golden hat and was declared the winner. It was then up to Katy and Holly to battle it out to become runner up, Katy took the title and Holly, being in last place had the job of packing the game up – which only took a few minutes!

Overall the team had lots of fun playing this game and it had us on the edge of our seats as we tried to not wake Captain Boney.

This competition is now closed. Congratulations to our winners who have all been notified!

UnderTheChristmasTree participates in various affiliate marketing programs and Google adsense which means we may get paid commissions on chosen products purchased and adverts through our links to retailer and advertisements sites.