Monopoly Voice Banking is the brand new, cash-free voice-activated game. Simply control this game with just your voice. We were kindly sent this to review, here’s what we thought.

This game requires a minimum of two players and a maximum of four, so Holly, Katy and Mandy were all up to try this voice-activated board game.

‘We all really enjoyed playing this new version of Monopoly, it was so different to the other versions. To begin with we took out the board game, set up the banker’s hat and we each choose a character.

*We earn a commission for products purchased through some links in this article.

I chose Scottie, Katy had Hazel and Holly had Racecar and we placed these on the ‘GO’ square. We placed each of the property cards in front of the correct squares and put the hat in the middle of the board. Katy rolled the highest number on the dice so she went first, then Holly and finally myself. We moved around the board and landed on each of the squares as this was where the new banker hat came in. Katy landed on Whitechapel and wanted to buy the property so she pressed the cat button and said ‘Buy’ along-with Whitechapel, at this point Mr Monopoly then told Katy how much he had removed from her account and then the card was hers. 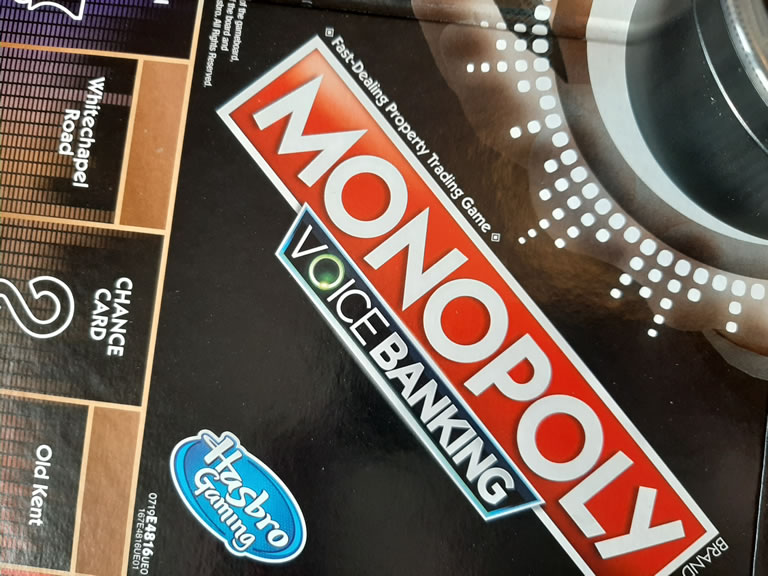 There was also the option to put the property up for auction if no-one wanted to buy the square, Mr Monopoly then began auctioning off the property and the highest bidder won. Get Out Of Jail was also on the board, unfortunately I ended up in Jail after rolling 3 doubles in a roll and had to pay 50M at the beginning of my next turn.

We moved around the board buying and building properties, unfortunately Holly landed on one of Katy’s properties and had to pay rent which Holly was not pleased about. The winner of the game was Katy as she had the most property and the largest amount of money at the end of the game.

The only thing we would say about Monopoly Voice Banking is make sure you speak clearly and and don’t shout at Mr Monopoly as he will not pick you up clearly to hear the instructions.

Overall we all loved the new format although it felt strange not having the money and the chance cards but loved the modern voice activation.”

Monopoly Voice Banking is suitable for ages 8 years and up and more information can be found at Hasbro.